By: A Collection of Students Across the Nation 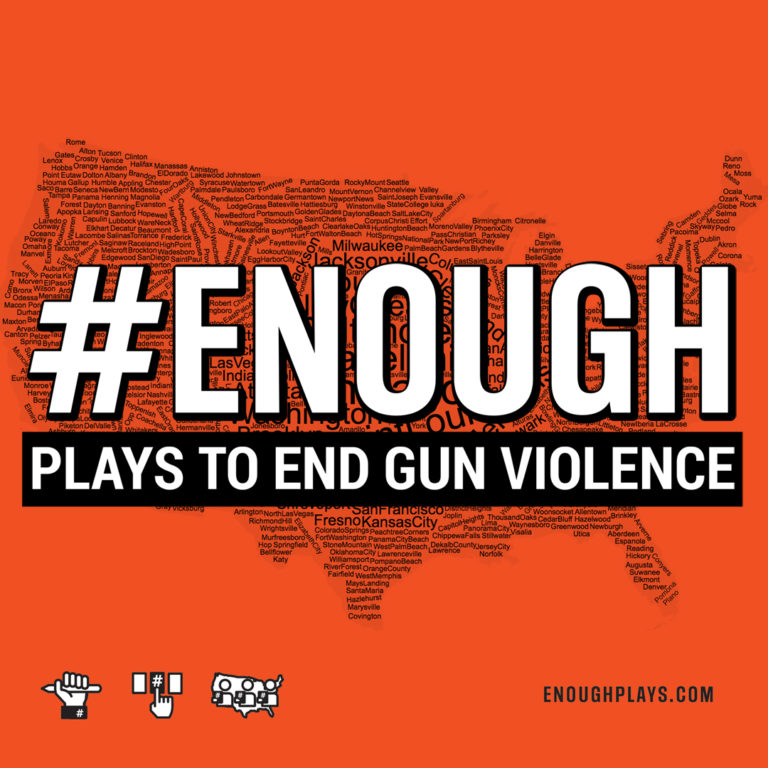 Santa Fe Playhouse stands in solidarity in combating Gun Violence in our nation and our schools.

TONIGHT AT 5:00 PM (MST), in remembrance of the shootings at Sandy Hook, The Santa Fe Playhouse, in co-production with its Young Playwrights Project and Almost Adults Productions will present a digital presentation of plays written by teens from across the nation.

The Live Talk Back will take place at 6:40 PM immediately following the performance via Zoom. CLICK HERE to join the open Zoom forum with Miranda Viscoli of New Mexicans to Prevent Gun Violence after you watch the show! Joining us as well are two of our out-of-town directors Jonathan Norton (Ghost Gun) and Andra Laine Hunter (Loaded Language) – both from Dallas, TX – and their casts.

This virtual performance will be available through this week, so if you miss it tonight for the live premiere you may still access our performance until the end of the week!

#ENOUGH: Plays to End Gun Violence calls on teens to confront gun violence by creating new works of theatre that will spark critical conversations and incite meaningful action in communities across the country. Our mission is to promote playwriting as a tool for self-expression and social change, harnessing this generation’s spirit of activism and providing a platform for America’s playwrights of tomorrow to discover and develop their voices today.

#ENOUGH was launched by Michael Cotey in 2019 shortly after the consecutive mass shootings in El Paso, TX and Dayton, OH. By then we had already witnessed a powerful youth movement emerge shortly after the senseless shooting in Parkland, FL the year prior. March for Our Lives, Students Demand Action and other activist groups were organized, passionate, and rightfully angry. Young people took to the streets (and continue to do so) to manifest the change they wanted to see in the world while policymakers continuously failed to rise to the challenge.

Inspired by other similar letters to the incoming administration, we’ve crafted an Open Letter to President-Elect Biden and Vice President-Elect Harris calling on them to prioritize Ending Gun Violence and Centering Youth Voices in the Conversation.

Add your name to it, and share it with others in your circle  – your artists, your audience – to do the same. With hundreds working on this project across the country, we’ve accomplished an incredible feat in creating space for conversation together. Let’s make sure our young people’s voices are heard.

Cedric has won multiple honors and distinctions as a writer, director, and producer of both film and theatre including being on the shortlist or the 2016 Academy awards or short films. In 2005, he founded To & Fro Productions, a film company dedicated to telling gripping stories with depth and sophistication. As executive producer of To and Fro Productions he wears many hats from developing scripts, creating budgets and casting to writing, engineering production strategy, and directing.
Projects of note include Noisy (producer, director, & writer),  Outwordly Fabulous (producer, director), Without Grace (Line Producer) Dongmei (producers & director)