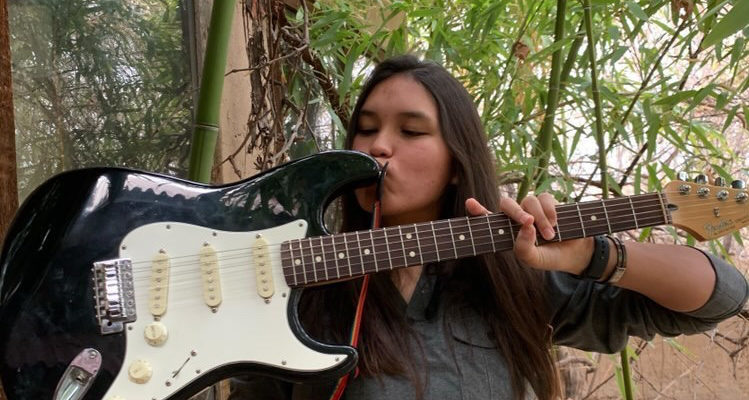 Native Guitars Tour is a collective of musicians and artists. Our movement has led us to foster and mentor talent and employ artists within the industry. Our goal has always been to support the relentless and unshakable talent that our Indigenous people possess. Native Americans are vastly underrepresented proportionally within the mainstream industry. NGT aims to reduce the unbalance by providing a stage for Native American artists.

During the COVID-19 pandemic, we have featured hundreds of artists and produced over 150 virtual shows on our social media platforms to showcase Indian country.

Native American musicians have a unique story. We come from tradition and community and are doing amazing things with music globally. From blazing electric guitars to prodigies of violin and cello. The NGT community is on the move and, we want you to join our journey.

The brother and sister duo originate from the Ihanktonwan (Yankton) nation in Marty, South Dakota. Guided and taught by their stalwart father and earth focused mother, passion for the people, protection of the planet, music, and the realities often swept under the rug by society were omnipresent from early childhood.

The most current project is heavily focused on MMIW, an anagram meaning “Missing and Murdered Indigenous Women”.  With the too long ignored epidemic of Indigenous women being brutally murdered and some never found affecting Indigenous peoples in Canada, the United States, notably those in the FNMI (First Nations, Métis, Inuit) and Native American communities spanning across the northern and southern American continents at a rate 10 times higher than the US national average it was felt that creating uncomplacent, relatable, and vexing music was something that could be a supportive, empathetically healing resource for the families that have experienced this loss and bring in allies among non-native peoples by sharing with them present realities through unyielding sound.

Black Owl stands strong among music spanning generations, age groups, and genres.  With every song written with a specific focus not only can you expect gripping music but poignant lyrics rooted in truth.

Eclectic Roots-Rock from the southwest Pueblos of New Mexico, The Native American-led trio guides you through a journey of stories about the homelands of the Cochiti Pueblo reservation in NM. Jir Project is a fresh take on blues-influenced music in the genres and styles of Alabama Shakes, Gary Clark Jr., and Jimi Hendrix.

Jir Project has won steadily escalating acclaim for their multi-dimensional performances. The sophomore release, “Sun Child,” garnered an international North American Indigenous Image Award for Outstanding Blues Album. The current album “The Pueblo” has been nominated for several awards and is by far the fan favorite of their discography. The band is excited to embark on their post-pandemic journey with the upcoming 2021 winter album release with songs of growth and balance as they journey out from loss into a new light.

Ailani Swentzell is a 17-year-old self-taught singer-songwriter. Located in Santa Clara Pueblo, she has a home studio built by her and her grandmother, where she has currently self-produced three albums. Ailani’s latest release, “Heartbroken Bones” has been played on online music streaming services in 81 countries/regions. Ailani’s songs have a heartfelt indie rock-pop feel.

A collaboration between Santa Fe Playhouse and SWAIA, who happen to share a birth year of 1922!