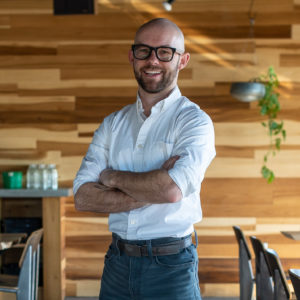 James is driven by the belief that a successful organization depends on establishing and presenting core values. He specializes in presenting these core values in digital mediums. He believes that effective human communication can be achieved digitally and has dedicated his career to curating this awareness for non-profit organizations and small businesses.

James has a B.F.A. in Theatrical Scenic Design from the University of Idaho where he also studied Art and Creative Writing. He’s designed over 170 theatrical productions ranging from large-scale classic musicals to intimate black-box new works. While working as a scene designer, he recognized a need for more effective branding and communications, specifically for nonprofits. The theater companies he designed for were struggling to bring artistic passion and effective communication to their digital communications, specifically their websites. As a result of this recognition, James transitioned from an artist on the stage, to being an artist for the stage.

James’ first introduction to Santa Fe Playhouse was in 2018 when he designed an original play called No Number Home directed by Vaughn Irving. Since then he’s been an avid supporter and patron of Santa Fe Playhouse and is honored to be a part of the Playhouse’s Board of Trustees.