Play: Everybody by Brandon Jacob-Jenkins 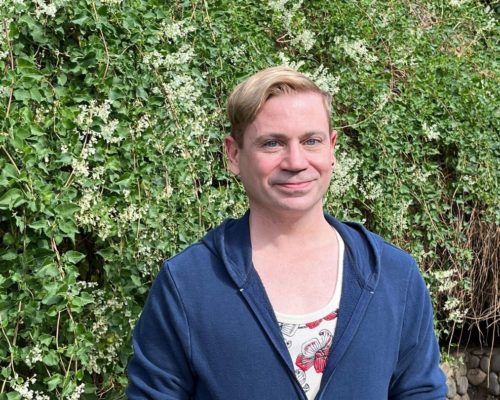 David is the author of several plays, including Anaïs Nin Goes To Hell and Barrier Island, the latter of which was a New York Daily News Editor’s Pick in 2010. He graduated from the now-shuttered College of Santa Fe in 2000. He has lived and worked in New York City for many years. He was the director of arts and culture, running a theater when COVID hit.

“I was furloughed and was told they weren’t sure when or if I’d be able to come back. My partner, Antonio, and I said then we’re out of here, for at least a little while. We have friends here, have loved ones here, and love Santa Fe, so we came to Santa Fe,” he says.

David is one of five actors playing Everybody/Somebody — archetypal roles that are assigned each night by lottery and then brought to life in different ways by each actor. Everybody is the main character, and the Somebodies are various relations, ideas, or ways of being, including Friendship, Love, and Stuff. Everybody is on a journey to see God, which sounds heavy — and it is. But it’s also funny.

“My approach is that Everybody is 40,” David says. “He’s a Chelsea boy, lives in Manhattan. He’s in a mid-level career job, very focused on his career, and hasn’t been focusing on relationships, and is suddenly told that he’s dying. He has to grieve not only the loss of his life but his relationships. Maybe he didn’t do enough with his life. There are many different interpretations.”